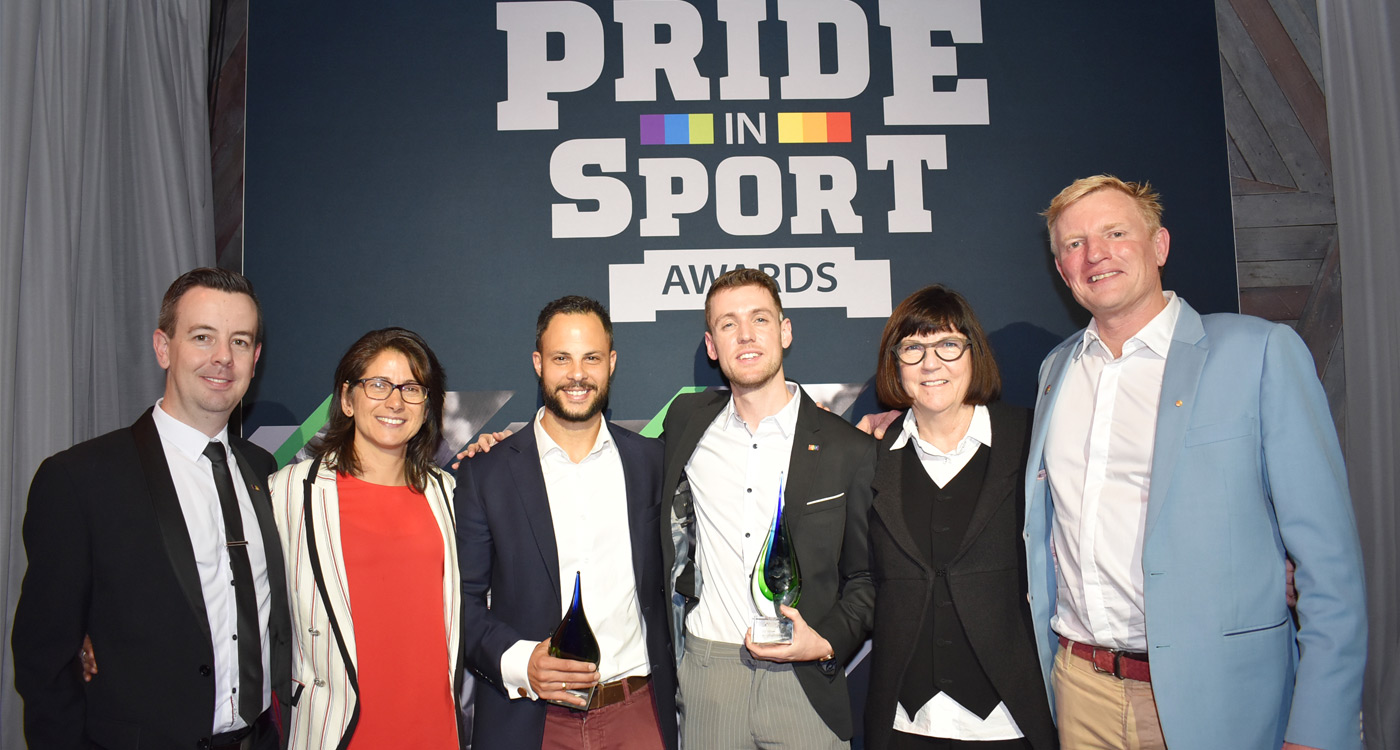 Cricket Victoria, Tennis Australia, Australian Football League (AFL) club St. Kilda and Melbourne University Sport are among other sporting organisations and individuals who have been named as Australia’s best for LGBTQ inclusion at the Australian Pride in Sport Awards held today at the Cargo Hall in Melbourne.

Three individuals across various sporting codes were awarded for their efforts in making their respective sports more inclusive of LGBTQ people on and off the field, with three community awards also being handed out.

The awards showcase the results of the Pride in Sport Index (PSI) – a national benchmarking instrument used to asses LGBTQ inclusion within Australian sport.

ACON Vice-President and Co-Founder of the PSI, Andrew Purchas, said: “Despite significant recent gains in equality and law reform, the past year has shown that struggles continue to persist for LGBTQ people in Australia, including within the sporting sector”.

“These awards and the index continue to highlight the important inclusion work being done by many within Australian sport, as they provide sporting organisations and figures with an opportunity to reflect on their work in the inclusion of LGBTQ participants and staff, and identify areas they can address to ensure their sport is truly inclusive.

“Many of Australia’s sporting organisations are taking the positive steps needed to be taken to ensure your sexuality, gender identity and experience does not impact your ability to play, watch or be involved with sport at any level.

“I congratulate all the award recipients and the many others working towards making Australian sport an inclusive place for everyone and I’m proud to celebrate those success stories at the Pride in Sport Awards today,” Mr Purchas said.

This year’s PSI results saw a 61 per cent increase in index submissions, highlighting the focus sporting entities are beginning to put on LGBTQ inclusion within various codes. In addition, award nominations from the wider community also rose by 70 per cent, indicating that a far greater portion of the sporting community are achieving positive outcomes when they develop initiatives for inclusion at a grassroots level.

Program Manager for Pride in Sport Beau Newell said: “Since 2016, the Pride in Sport Index has continued to see a significant shift in practice with LGBTQ inclusion work in Australian sport. With a wide range of sporting organisations participating, we are seeing more and more commitments to providing safer and more inclusive environments and experiences for LGBTQ people”.

“While inclusion has well and truly made its way onto the Australian workplace diversity and inclusion agenda, there is more to be done to ensure that sport in Australia can experience greater levels of LGBTQ inclusion.

“I would like to congratulate each sport and the many volunteers on the efforts they are making to ensure everyone is welcome both on and off the sporting field,” Newell said.

ABOUT PRIDE IN SPORT

Pride in Sport is a national not-for-profit program that assists sporting organisations and clubs with the inclusion of LGBTI employees, players, volunteers and spectators. It is part of ACON’s Pride Inclusion Programs, which provides a range of services to employers, sporting organisations and service providers with support in all aspects of LGBTI inclusion. All funds generated through membership and ticketed events go back into the work of Pride in Sport, actively working alongside sporting organisations, clubs and participants to make Australian sport inclusive of LGBTI communities. For more information, visit the Pride Inclusion Programs website here.

ABOUT THE PRIDE IN SPORT INDEX

The Pride in Sport Index (PSI) is an independently administered benchmarking system that provides the opportunity for all national and state sporting organisations to have their LGBTI related initiatives, programs and policies reviewed, measured and monitored. An initiative of the Australian Human Rights Commission, the Australian Sports Commission and a legacy of the Bingham Cup Sydney 2014 (the world cup of gay rugby), it was developed alongside an advisory group that includes representatives from the National Rugby League (NRL), the Australian Football League (AFL), the Australian Rugby Union (ARU), Football Federation Australia (FFA), Cricket Australia, Swimming Australia, Water Polo Australia, Basketball Australia and Golf Australia. For more information, visit the Pride in Sport website here.