'HIV Testing: It's What We Do': New ACON Campaign Launched 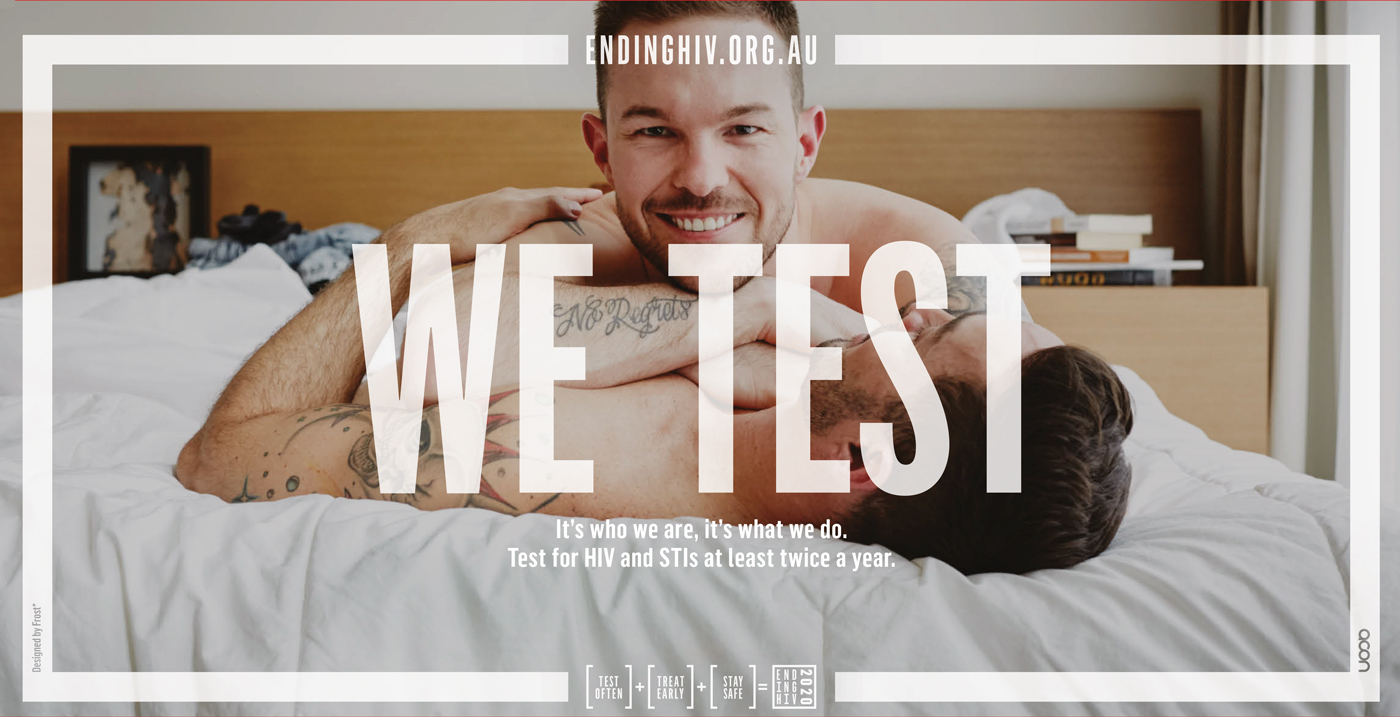 A new health campaign is aiming to keep testing front and centre of HIV prevention efforts, by urging all gay and bisexual men across NSW to continue testing regularly for HIV and STIs.

Launched today by ACON – NSW’s leading HIV prevention, HIV support and LGBTI health organisation – to coincide with this year’s World AIDS Day on 1 December, the We Test campaign reinforces HIV testing as a health habit that is culturally ingrained in the LGBTI community, and encourages gay and bisexual men of all backgrounds to incorporate regular HIV and STIs screenings as a central part of their sexual health regimes.

“HIV testing has been integral in our community’s fight against the epidemic since it began,” said ACON CEO Nicolas Parkhill. “HIV testing rates among gay men and other men who have sex with men across NSW are at an all-time high. We are heading in the right direction towards our goal of virtually eliminating new HIV transmissions by 2020 and we must maintain the momentum.

“Just as gay men and other men who have sex with men now have a range of effective HIV prevention tools available such as condoms, PrEP and having an undetectable viral load, they also now have access to a variety of testing options,” Mr Parkhill said. “No matter who you are, where you are, or which HIV prevention method you use: regular testing is part of our routines – it’s who we are and what we do. HIV testing is embedded in our culture – it’s part of the way we look after ourselves and each other.”

The campaign features a diverse range of community members in a variety of locations, underscoring the message HIV testing is available to anyone.

“For people in metro and suburban areas, clinical settings such as sexual health clinics, GPs and community-based testing services such as ACON’s a[TEST] have become very popular for their ease-of-use and peer-led experience.

“People in rural and regional settings where access to sexual health testing may be limited are encouraged to discuss testing with their GP, as well as consider testing alternatives such as dried blood spot testing, which is a free and effective test-at-home and mail-back method.

“These various options will help gay men and other men who have sex with men take control of their health. It is recommended that people get tested for HIV at least twice a year, and up to four times for more sexually-active people.”

We Test is the latest campaign from ACON’s Ending HIV initiative designed to reinforce the importance of HIV testing.

“Recent data has shown that many cases of HIV transmission are from people who are unaware they have the virus, highlighting the importance of regular and frequent testing,” Mr Parkhill said.

“There are various reasons why people don’t test for HIV, be it whether they’re fearful of a positive result, unsure of where to get tested, not believing they are at risk, as well as issues that can be experienced by people from culturally and linguistically diverse backgrounds and people in regional and rural locations.

“The more gay men and other men who have sex with men know about their HIV status, the quicker they can access treatment, improve their health and prevent onward transmission.”

The campaign will be promoted across NSW in print, radio, digital and outdoor media. It is accompanied by a video to be released across social media networks.

“We thank gay men across NSW for continuing to take action and heeding the call to end HIV by testing more often,” Mr Parkhill said. “We now encourage other gay men and men who have sex with men to book a test or drop into any of our testing sites across NSW, because it’s now easier than ever to get tested and take control of your health.”

Check out the We Test video below.

For more information on We Test, visit the Ending HIV website here.

Give Volunteer Spread the word