Chloe and Zeek are partners from the Hunter region of NSW. Chloe is Zeek’s official carer, but here they share their experiences of supporting each other and being supported by their friends.

Zeek and Chloe have a number of supports they draw on to maintain good mental health, both formal and informal. Zeek sees a psychiatrist, a mental health occupational therapist, a GP, and a case coordinator. He also has Chloe, his official carer, his foster family, and a really close group of friends. Chloe also has a psychologist, but primarily relies on the support of her friends and family. 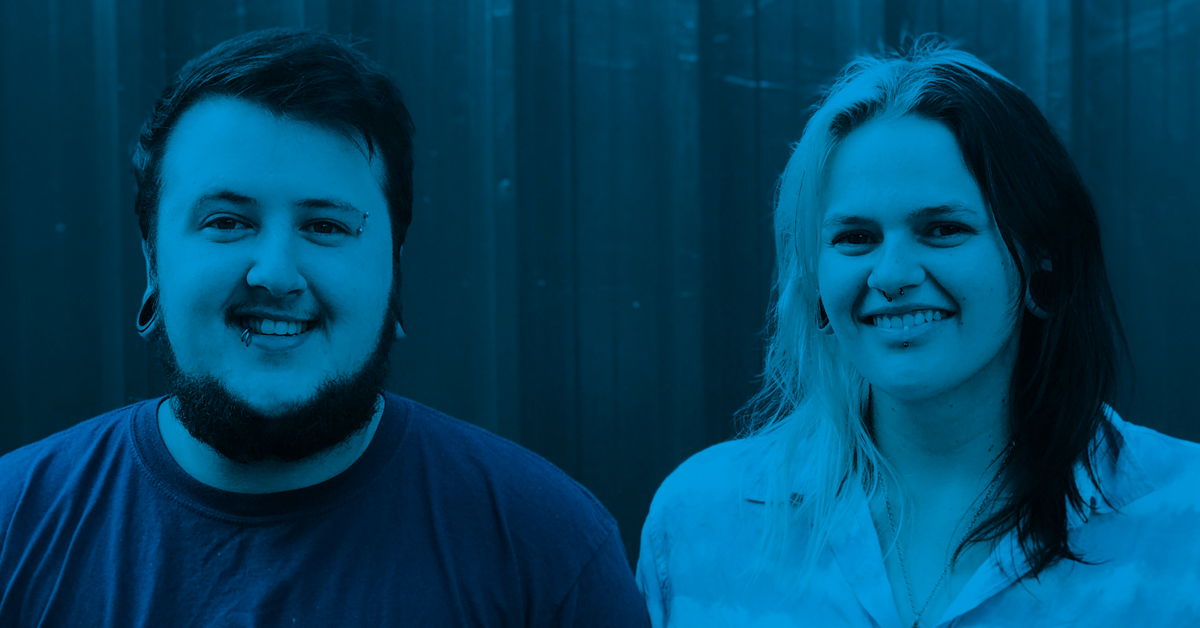 Both Chloe and Zeek spoke about just how important their friends are in supporting them. “They truly have a desire to support me, and support Chlo,” says Zeek, “for no other reason than just out of unconditional love and respect, and wanting us to be able to do the best that we can.”

Zeek said his friends have helped him through periods of self-harming, and when he’s struggled with drinking. “When that support is called upon, they're more than happy to step up,” Zeek says. “They listen to the things that I need, or that Chloe needs, really take it on board, and are reflecting that in their actions.” For Zeek as well, it’s important that his friends are really supportive of who he is. “All through high school, I was that trans kid, that was my identifier… coming from one of the crappiest times of my life, to now, it’s just who I am. It doesn’t even factor into who I am to the people that love me.”

For Chloe, support really comes down to being caring and compassionate. “It's an act of caring. It's caring enough to also follow through and create action. And it can be little things. It doesn't have to be something massive, it can just be being kind, being caring, being compassionate.”

Chloe and Zeek’s friends demonstrate that care and compassion through the way they listen and respond to their needs. “They really take the time to get to know Zeek and what he needs,” Chloe says. “Zeek has sensory issues. So certain textures, tastes, smells, noises, they can put him in sensory overload. And they all took the time to learn those things so that they could avoid triggering smells, or so that they know not to talk over the top of each other, so that they're not negatively impacting on his mental health.”

Because of this sensory overload, Zeek hates dry sand, he can’t deal with how it feels. But he loves the beach. So when Zeek, Chloe, and their friends go to the beach, “the boys will pick me up and carry me across the sand,” Zeek laughs. “And it's funny, because we watch all the other people on the beach see this happen and go, ‘What is going on? Why are they carrying that adult man across the sand?’ But for us, that was just something that we learnt that works, and that they were happy to do so that we could still go out and have a good day. Those sorts of things really mean a lot from your boys, from your mates.”

For Zeek, asking for support can be hard. “As lovely and as generous as it is to offer support, and be willing to follow through if you were taken up on it,” he says, “it can be a really vulnerable and difficult position to put yourself in.” Because of that, Chloe stresses the importance of building a trusting relationship first. “It's a very vulnerable place having to ask for help, and you can't just expect someone to share that with you without having a close relationship first,” she says. “Let them take it at their own pace if they're not ready to share that with you because the relationship isn't there yet, then be okay with that, and just continue on, and work on making that relationship stronger so that they can be vulnerable with you.”

“People take it as a bit of an attack when they offer support and it isn't accepted,” Zeek says. “It really does take a long time to build the foundation of friendship, and love, and respect first before you let it go to this new place where in that moment, the dynamic changes from you and your best mate to you needing help, and your best friend needing to go that extra step, help you take a shower, or help you go to the toilet, or those sorts of things. It can be really difficult to build that rapport. But it is necessary as well.”

Chloe has taken on a supportive role for Zeek, but has also been supportive of her family too. In these contexts, her method of providing support can be quite different, as it depends on what the other person needs. With her family, she would “(sit) there with them, listening to them, hearing them out, what they had to say, and not holding anything that they said against them, just letting them sit with their emotions, sit with their feelings, talk it out.”

“She helps me self-soothe,” Zeek responds. “When my head is in that space, it doesn't automatically occur to me to go and do those things” that would soothe him. Chloe would help Zeek “to do the things that I know can bring me back down enough to either talk about it further and move on from it, or just to bring me down enough that it doesn't escalate any more than it needs to,” he says.

Zeek supports Chloe as well. “I do my absolute best to make sure that I can support her. But I know in myself, and I think she knows as well that that's not always possible. So sometimes my way of supporting her is to reach out to our friends and be like, ‘Hey, how about you guys come over.’”

“I recognise that because she supports me so much, that there are going to be things about her role, or about our dynamic that she's not going to want to talk to me about,” Zeek explains. “So it's about recognising that, recognising that she needs other meaningful relationships that can support her in different ways than I can. So whether that means going out with a group of friends, or making sure that she's got an upcoming appointment with her psych, making sure that she's going to the GP, those sorts of things.”

Chloe relies on self-care as well as her other forms of support. Whether it’s listening to music, taking a bubble bath, getting creative or active, or just hanging out with friends. “Self-care is important when you're providing care for someone else, because you can't support someone if you're not okay yourself,” Chloe says. “You're not in the best position to really give the person what they need. So it's vital both to you and to them to make sure that you're okay, and that you can do things that you can do and support them.”

“It's important to remind yourself that it's okay to say to someone that you're not okay to support them and that you can't actually do it right now,” Chloe says.

If you need more information about supporting friends or loved ones, find out more here: acon.org.au/withyou

ACON provides confidential counselling to people in our communities seeking support in relation to their mental health and wellbeing. Contact ACON on (02) 9206 2000 or 1800 063 060 or visit the ACON Mental Health page.