Jazmin Theadora is an 82-year-old transgender woman living in the Northern Rivers region of NSW. This is the story of her experiences with mental health and tenacity in the face of adversity, as well as her advice for building strength, resilience, and good mental health. 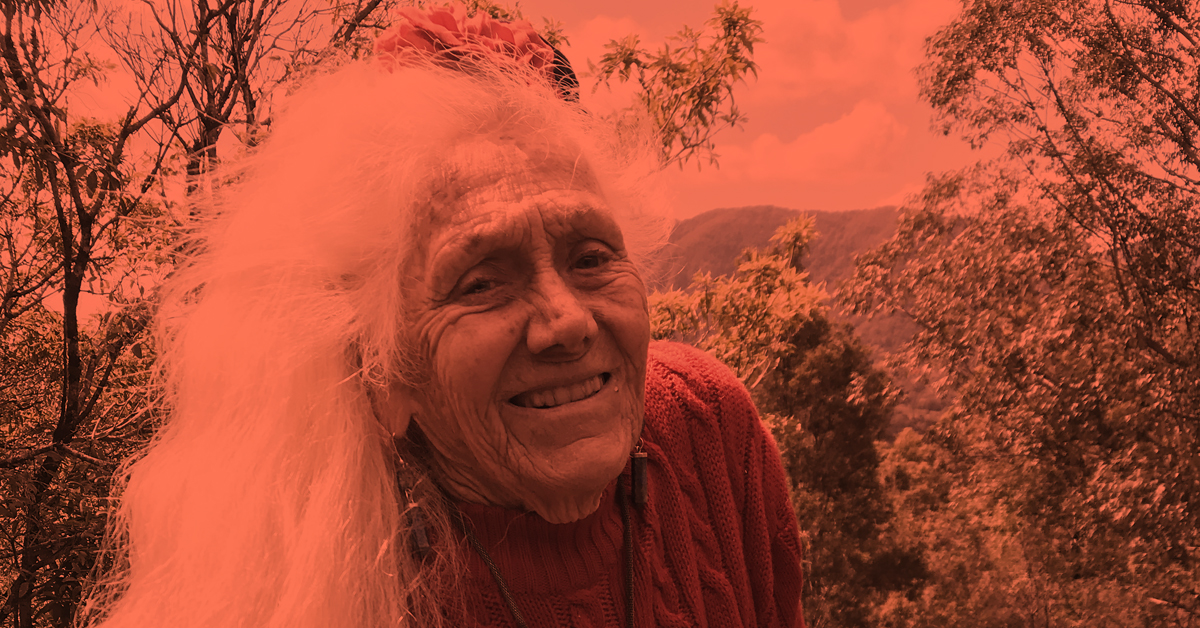 Born in 1938, Jazmin moved to Kings Cross in 1955, at the age of 16, and lived “24 hours a day” as a woman, one of the first people in Sydney to do so. At the time, stigma, discrimination and criminalisation of sexuality and gender diverse people meant Jazmin had many unfortunate encounters with law and medical establishments alike.

When she was living in Kings Cross during this time, Jazmin was frequently beaten by police and held in police custody for the night. Eventually, she was arrested and charged with vagrancy, and sent to a men’s prison for two weeks, where she was misgendered and forced to shave her head. This was how many trans people were treated and it wasn’t very long ago at all. We might call this conversion therapy these days.

Of her experience in prison, Jazmin says: “it was a good experience just being in jail for two weeks and seeing how it worked. It was hard, because I came out and had to start growing my hair again, and eventually got a wig and lived 24 hours a day as a woman, but with a wig on.” Trans people know themselves deeply, even when those around them won’t affirm who they are.

At one point, Jazmin had had enough of the way she and her friends were being treated by the police and society at-large. While she notes that she did have a lot of self-esteem, she found it very hard to connect with the great things about herself when people were putting her down so much, and so she lost a lot of her self-confidence. Jazmin attempted suicide, and was in a coma for six days. During this time, upon discovering her genitalia, her head was shaved once more by the nuns and nurses at the hospital.

Clinical support wasn’t really an option because transphobia was rife within mental health institutions. Sexuality and gender diversity were considered diagnosable mental illnesses by psychiatrists and psychologists. This pathologisation of the trans experience, and for those seeking gender affirming healthcare continues today, although there is a strong movement for reform.

At the age of 26, Jazmin began to turn her life around. She describes it as “something just went ‘click’, and I thought, ‘this is my life, and I have to live it’… I’m an intelligent, wonderful person, and I have to treat myself as such.” She recognised that the way she’d been treated by others was not representative of who she was, or of what she deserved.

She forged her own path, developing resilience and strength by herself. She worked on building her self-esteem, and on refusing to listen to what others had to say about her. This was the beginning of a positive transformation for Jazmin, who now spends a lot of time helping other people get in touch with their own needs via tarot readings and teaching meditation.

Jazmin’s self-esteem continued to improve when she started working as a stripper and soon became the star of the show so was able to start saving money. During this time she started to also take care of her mental health by eating well and getting out during the day, and really trying to take care of herself and her body.

In 1969, she moved overseas with her boyfriend, and felt more in control of her life than ever before. Her mental health improved as she lived overseas, travelling the world, dancing, learning new languages, experiencing everything life has to offer.

Now, Jazmin looks after her mental health by concentrating on looking after her body. She makes sure that she eats well, exercises, practices meditation, and uses natural remedies. Every day Jazmin uses affirmations to get in touch with herself, centring and grounding her experiences. But the most important thing, for Jazmin, is to breathe. “Without oxygen, our brain can’t work properly,” Jazmin says. “You’ve got to breathe solidly for 15 minutes, once a day.” Doing this helps to get in touch with yourself in order to manifest love and good mental health. As Jazmin says, “Oxygen gives you power. There’s a food in oxygen that feeds your brain.”

Jazmin also provides support for countless people in her communities. She’s been honing her work as a psychic since 1968, and finds that through her work, she can help to centre and ground people that come to her. For Jazmin, tarot readings help people get in touch with themselves. She finds it improves their self-esteem and sense of self-worth. Many people, especially women, aren’t giving to themselves enough, and Jazmin helps people recognise their own importance, to look after themselves first. It’s not that you can’t give to other people, but most people just give to others to the point they have nothing left for themselves, says Jazmin. So she encourages people to give to themselves, and to breathe deeply and meditate.

As she has learnt through her own life experiences, and the support she gives others in the community, for Jazmin, the two best things you can do for your mental health are to look after yourself with oxygen, food, and exercise, and to love yourself.

If you need more information about supporting friends or loved ones, find out more here: acon.org.au/withyou

ACON provides confidential counselling to people in our communities seeking support in relation to their mental health and wellbeing. Contact ACON on (02) 9206 2000 or 1800 063 060 or visit the ACON Mental Health page.